What is a Maker's Mark?

Some vintage jewelry designer sign their pieces with various signatures on the back. These are called maker's marks. These markings can be part of the actual metal, or they can be on metal plates which are then soldered to the metal. Sometimes, a piece can be signed in a different way - perhaps on the front or back of a hand painted piece. In this case, the author will sign a piece with paint. However, most marker's marks are done in metal.

These markings are sometimes referred to hallmarks, but a hallmark refers to an indication of metal content found on a jewelry piece. It can be alone or in combination with the mark of the designer. A maker's mark by itself is not considered a hallmark.
Many maker's marks are fairly obvious - they are visible with the naked eye when you turn the piece over. Sometimes, though, a mark can be very tiny and you can find it just about anywhere on a piece, so it is important to examine the jewelry carefully to see if it is marked.
I've seen signatures on the pin part of clasps, in tiny lettering on the edge of the setting, inside of a bale where a pendant hangs from a chain, on a clasp tag, and on an enlarged O ring near the clasp. They are found on the back of the clasps for necklaces and bracelets, on the underside of pendants and pieces of other necklaces, and backs of brooches.
Designers do not always use the same marking. There are many designers who have used four, five, or even more, different marks through the years. The following are photos of a few maker's marks that you may have seen. These are from designers Sarah Coventry, Coro (sterling), Schreiner and Weiss.

In Comparision, the following are hallmarks (some also have maker's marks incorporated into the marking): 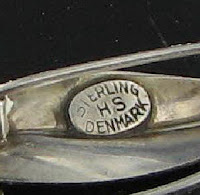 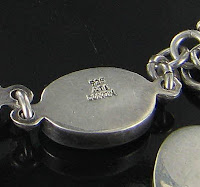 Not all vintage jewelry is marked but many are. There are notable designers who used only paper hang tags which were often removed when the piece was worn and then discarded. Juliana jewelry, made by Delizza and Elster, is probably the most well known design of this type.
Other designers marked many of their pieces, but also made some which were not marked. To identify these, one needs a good knowledge of their design techniques. I'll cover some of these in a later blog.
Vintage Jewelry Lane has a wide range of designer signed jewelry. Have a look to see if your favorite designer is featured this month.
Posted by Carol at 12:00 PM