Aurora Borealis Jewelry - How Old is it Really?

Full of fire and light, aurora borealis (AB for short) rhinestones and beads were a favorite of vintage jewelry makers. But don't be fooled by retailers who try to convince you that the piece of aurora borealis jewelry they are selling is from the Victorian, or Edwardian, or even Art Deco period. It isn't. 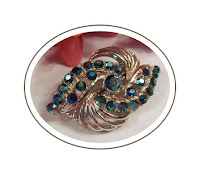 In the early to mid 1950s, the Swarovksi Company began experimenting to give a lustrous aurora borealis coating on crystals to make them more radiant. The process was meant to simulate the effect of the Northern Lights, or the celestial Aurora Borealis. By 1955, the process was perfected by Swarovski, who also worked closely with Christian Dior in the design of jewelry with these stones. 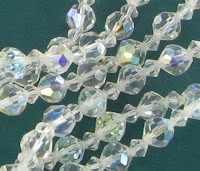 When you examine a rhinestone or glass bead which has this coating, you will see shimmering colors radiating from the beads in a variety of shades. Early colors had mainly a bluish coating, but over the years more and more variations in the coating color was perfected and the stones now have a wide variety of colors available. Jerry Smith from Beads and JSBeads.com has a wonderful chart of Aurora Borealis coating colors on his site.

At first, the jewelry made from these stones was only available to the very wealthy, but the process was licensed for use by other manufactures, such as Corocraft, who used it in their Vendome line. Later, when plastic beads with this finish became the vogue, the jewelry became cheaper and more affordable by the general public.


The use of Aurora Borealis stones and beads in jewelry was very popular until the mid 1960s, when it tended to fade from the manufacture of jewelry, only to have a huge resurgence in later years of the last century when vintage jewelry collecting started to become so popular.


Although one can acquire jewelry from many time periods with AB stones, for investment purposes, the 1950s is the time period on which to focus. Aurora Borealis stones were fashioned 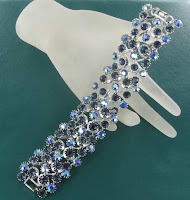 into all types of vintage jewelry - necklaces, bracelets, earrings, rings, pins and brooches are all found with these stones. This lovely
aurora borealis bracelet from my Vintage Jewelry Lane site is a lovely example of the blue coating.


So, when you find a piece of jewelry with original aurora borealis stones, don't be fooled into believing that it dates from the 1930s or 1940s. Occasionally, you may find a patent number on the back of a piece which will specifically date it, but the patent will never indicate a piece earlier than 1955 unless the stones have been replaced.
Posted by Carol at 8:47 PM