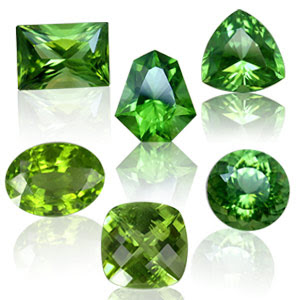 My goodness, it's August already! This year has just flown by for me. Since it's a new month, it's time to talk about the birthstone for August - the Peridot.

This lovely gemstone is a semi-precious gemstone that is usually found in wonderful hues of translucent greens. It is the official birthstone for the month of August and is also considered the gemstone for the 3rd and 16th anniversaries as well as the stone for the Zodiac Sign Libra.

This gemstones is one of the few that comes in basically one color - green. There are varying shades from yellow green through to brownish green. The most valuable color is a dark olive green.

Peridot has been prized by royalty for thousands of years. It was used in jewelry as far back as the ancient Egyptians. It has been mined in numerous locations around the world, but the modern Egyptians have maintained a fondness for this gemstone into modern times. In fact, it is considered by many to be the national gemstone of Egypt.

As with all gemstones, Peridot has some specific healing powers attributed to it. It is thought to clear the heart chakra. It also strengthens breathing, promotes prosperity, growth, and openness. It was used by Egyptians, Aztecs, and Incas to gently cleanse and heal the physical heart. Yellower gems also aid in problems of the stomach, liver and adrenal glands.

The emotional qualities attributed to peridot are that it helps wearers understand relationships, and other realities, alleviates depression, anger, fear, jealousy and anxiety.

This lovely Georgian poem about the birthstone for this month couples peridot with love and relationships.

Wear a Peridot or for thee,

The August born without this stone,