Imagine a French baguette loaf of bread and then picture it as a rhinestone or gemstone. You have a baguette in mind. A baguette is a gemstone which has been cut into a long narrow rectangular shape, and the name actually comes from the French word for this type of bread.

The baguette is used in vintage jewelry in both the rhinestone and glass form of stone. A variation of it tapers so that one end is smaller than the opposite end, but in all cases, it is long and narrow. The term baguette can also be used to refer to a ladies style watch which has a thin, elongated rectangular or oval face. The shape is distinguishable by its much greater length than width.


Because of the slimness of it, it is usually found in channel settings, or with only two prongs - one on each end of the stone. I have also seen it simply glued in, but baguettes placed this way have a tendency to come loose, so look for channel or prong settings for them. The stones are available in both flat back and pointed back styles, so it is very versatile for all stone settings.


Baguettes come in all colors and sizes, but the majority of vintage jewelry designers used the clear diamante color. Sometimes the baguettes are used alone, and sometimes there are used in combination with other shapes of rhinestones. The following picture shows a lovely blue baguette style, followed by a pair of Coro earrings with clear baguettes in combination with chatons. 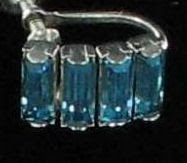 There is also a special finding which incorporates several baguettes in a group and encases them together so that they can be used as one piece. These are more often found on more contemporary jewelry. 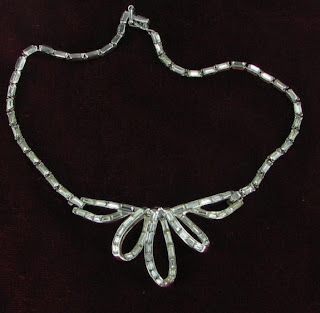 This lovely Trifari Patent Pending baguette necklace is available from my Vintage Jewelry Lane site for $125.99. I've also included the patent design on the listing page for your information. The earrings pictured earlier are also availabe on Vintage Jewelry Lane.
Posted by Carol at 12:29 PM