I love sterling silver jewelry. Even though it has a tendency to tarnish over time, I even enjoy the task of polishing it. It has an earthy feel which appeals to the Taurus in me. 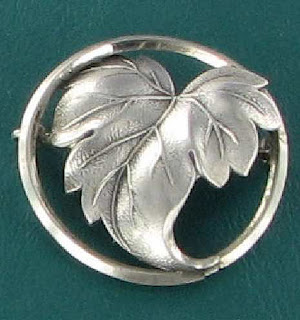 Sterling silver jewelry is easily recognizable once you start handling it, so it becomes relatively easy to identify a piece as sterling even if it is not marked, which sometimes occurs. It develops a characteristic patina as it ages. Fortunately, much silver jewelry is marked, so the task at identification becomes easier for you.
A lot of sterling silver is marked simply 925 - this is the most common marked used on silver jewelry made in the USA. The mark can be anywhere on the piece and the lettering can be any size. I've seen teeny tiny 925 marks on the post of an earring, so be sure to look everywhere - on the back of the piece, on the clasp, inside the bale of a necklace etc.

The 925 mark can be seen alone or in combination with other words, such as the name of the maker, or area of the world that it came from. Japan makes a form of damascene with sterling silver which has the words Amita sterling or Amita silver as a marking. Other designers use the word sterling along with their name, such as Beau Sterling (or Beauster) and Bond Boyd Sterling.

Other pieces are marked with the word sterling or even abbreviated to the shortened firm ster. Once again, this mark can be anywhere on a piece. Sometimes this form of hallmark is very, very faint. I've had pieces which had a gold vermeil coating on top of the silver that looked like gold, but upon polishing the piece have found the faintest letters saying sterling near a clasp. I once saw a brooch that had the word sterling stamped over several petals on a flower pin, so each petal only got a few of the letters.

Mexico sterling silver pieces are marked in many ways. Some are marked 980, of 950. Some will have the words Taxco silver, and older ones may be marked silver. Many Mexican silversmiths mark the piece with their initials. These initials can increase the value of the piece.

Rancho Alegas photo courtesy of ebay seller vintage-memories
Some Mexican silver made between 1947 and 1979 has an eagle stamp on the back of the piece. And after 1979 silversmiths starting marking the pieces with two letters and a number to identify it. One notable designer of Mexican silver is William Spratling - an American working in Taxco Mexico in the 1930s. His pieces are signed William Spratling.

Sterling silver jewelry from Scandanavia is sometimes marked Sterling, followed by the name of the country, and 826, 830s or 925s, i.e. Sterling Denmark 830s. Many of the older pieces have just the mark of the silversmith. Some notable sterling silver manufacturers from Scandanavia are David Anderson and Georg Jensen. Scandanavian silver is highly sought after and very collectible. 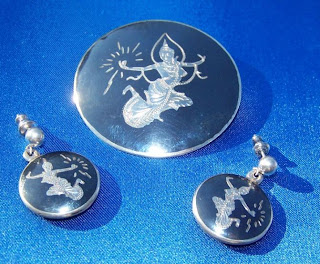 A modern designer who uses Thailand silver is Judith Ripka. Many of her high end pieces are marked with the word Thailand - Judith Ripka 925.