One of the most fascinating area of collecting 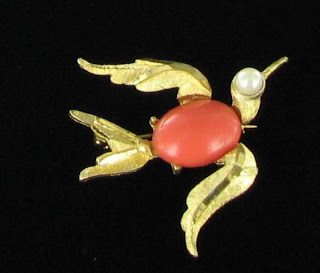 vintage jewelry is recognizing the look of the various designers who produced the lovely pieces that we like to collect and wear. Today's featured designer is BSK.
BSK is a designer about whom very little information seems to be available. The company was founded in New York in 1948 and did business until the mid 1980s. (I've seen one reference book listing the 1970s as the end of production, but most researchers seem to agree that they closed their doors in the mid 1980s. )The letters BSK stand for the first initials of the three owners: Benny Steinberg, Slovitt and Kaslo.
Their designs vary from simple silvertone and goldtone pieces to some particularly stunning designs with rhinestones. Overall, their designs are of average style, although very good quality. The jewelry sold well in the 1950s, when the demand for affordable jewelry boomed after the war time period. The BSK line was reasonably priced and was sold in department stores such as Woolworths.
It was normal during this period for mothers and teachers to receive BSK designs as gifts because of the competitive price point. One particularly interesting series that the company did was called My Fair Lady, and this is featured in many vintage jewelry reference books at better than average book values. Consider this a real find if you come across one of these highly collectible pieces!
The design characteristics of BSK pieces are the use of colorful enamel designs, with the base metal often dipped in the enamel. They made some whimsical designs. Their rhinestone pieces often used Aurora Borealis Rhinestones, in combination with enamel. Many of their designs featured a feaf style of overlay.
BSK designs had very little variation in their markings. Most pieces were signed just with the letters BSK in block lettering, either directly on the metal, or on a metal cartouche added to the design. The collectible My Fair Lady designs were marked BSK © My Fair Lady . 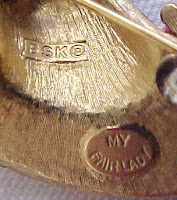 My Fair Lady photo courtesy of Ruby Lane seller The Vintage Princess
Here are some pictures of BSK designs which show both the simplicity and elegance characteristic of their designs. 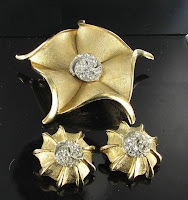 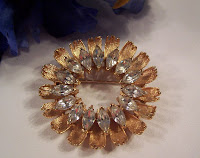 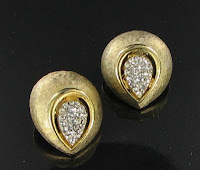 BSK jewelry is not particularly expensive to buy and is still relatively easy to find. Don't buy pieces with flaws, since they will not warrant repair costs to fix them. If possible buy sets instead of single pieces. BSK is prized by some collections of vintage jewelry for the lovely combination of enameling and rhinestones, so the pieces should slowly rise in value.
Posted by Carol at 10:16 AM