Full set, part set - What is a parure?

Married set, semi parure, demi parure, full parure? How does one know which word to use when describing a vintage jewelry set? It can be confusing because they are often used interchangeably by various sellers.
To be absolutely accurate, when the word parure is used, the pieces must have originally been designed to be worn together. Many designers made sets of 2, 3, 4 or even more pieces of the exact same design. Sarah Coventry is a well know designer of parures. The sets would often contain a brooch, bracelet, pair of earrings, necklace, and ring. The terminology used to describe them would depend on how many pieces of the original are being offered.
Other designers made just two pieces to be worn together, such as a brooch and matching earrings. If this is the case, the set can be correctly called a parure. 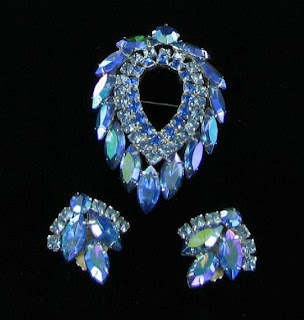 This stunning aurora borealis set by Sarah Coventry is called "Blue Lagoon." It was originally a hostess set of several pieces. The set featured is just the brooch and earrings. It is a correctly described as a semi, but is also often referred to as a demi parure. It is one of the most in demand sets from the Sarah Coventry line.
A married set is used when two similar pieces are offered. For instance, one might have a black glass beaded neckace which is teamed up with a pair of black earrings of a similar style. The pieces may be the same designer but not originally made together, or they may be from two different designers, but look well matched.
The following set is a good example of a married set from two different designers. It features a dogwood flower design. The brooch is marked Trifari and the earrings are marked Avon. They are not an exact match, but still look very nice together. 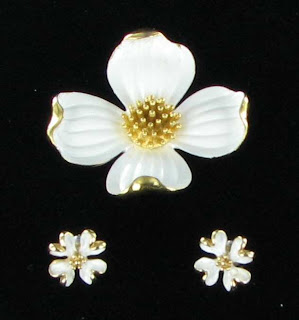 No matter the correct terminology, one thing is sure. Parures, or sets, are lovely and make more of an impression than single pieces. Be sure to check out the full range of parures from Vintage Jewelry Lane's collection. The two sets featured here are included, as well as many other design, and makers.
Posted by Carol at 1:28 PM