Today's post will continue our series devoted to various aspects to consider when putting together a vintage jewelry collection. In the last chapter we talked about the creative use of metal settings. Today we will discuss the various types of clasps used on vintage necklaces and bracelets.


It is hard to specifically date a piece of jewelry by the clasp alone, unless it is marked in some with with a designer hallmark. The reason for this is that most of the clasps used on vintage jewelry are also used on modern pieces. Condition of the metal and other design techniques in the piece should be used in conjunction with a clasp to try and narrow down the date.
Vintage jewelry necklaces were made with many styles of clasps. Most notable were spring ring, hook clasp, box clasp, fold over clasp, and fish hook clasp. Others used, but not as commonly, were barrel clasp and toggle clasps. Lobster claw clasps were a later invention, so they are not found on vintage pieces, unless the clasp has been changed at some point.

My favorite type of vintage clasp is the box clasp. It came in a myriad of styles, often with beads, rhinestones or other embellishments which match the rest of the necklace. The were made with a small box which had a tab which was inserted into it. The following photos show why it was so popular. The design ideas are endless. Many box clasp were found on jewelry before 1950. 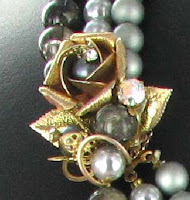 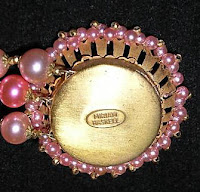 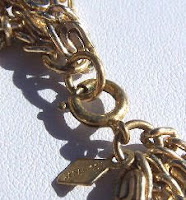 Spring ring clasps were commonly used. They came in two styles - one with a small tab to open the clasp and the other with just a small lip which can be swung back to create an opening. Spring ring clasps are still used today, but not as often. They have been mostly replaced with lobster claw clasps which are easier to open and close.

Hook clasps were often used on multi strand necklaces from the 1950s and 1960s. They were made of a metal hook which either "grabs" a bead in a dangling strand, or hooks in to a metal chain. The latter is still commonly used, but the former usually dates a piece as a vintage one.

A fish hook clasp is made with a small hook which is inserted into a metal finding, often a pointed oval shape. Good vintage fish hook clasps were often sterling silver. Modern metal ones are lighter in weight and made from goldtone and silvertone metal.

Fold over slaps were used for many vintage mass produced pieces. The underneath part of the clasp was a great place to put the designer hallmark. They were commonly used on necklaces and bracelets. On a bracelet, a fold over clasp was often used in conjunction with a safety chain to help prevent loss of the bracelet if the clasp open while the piece was being worn. This type of clasp was popular in the 1940s and is still used today.


Finally, barrel clasps and toggle clasp were used. These are often used today, so the metal condition is important to note when trying to date a piece with this type of clasp. Most older ones have developed a sort of brass like patina as they age. If you see shiny goldtone or silvertone barrel clasps or toggle clasps, the piece is likely to be a newer creation. 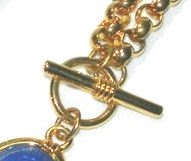 As with other findings and stones which make up a vintage piece, condition of the clasp is important when you decide whether to purchase the jewelry item. If the metal is worn, the value of the piece is diminished, although clasps are one of the easiest findings to replace.


Have fun checking out your necklaces and bracelets to see what type of clasp that your jewelry has!


Check back soon for the next chapter in this series which will deal with clasp types used on vintage jewelry pins and brooches.


Vintage Jewelry Lane has a wide range of vintage necklaces and vintage bracelets with all of these types of clasps. Be sure to check out the selection sometime soon.
Posted by Carol at 9:19 AM