Do you enjoy looking at old coins, thinking about Napoleon, or remembering a place where you have once traveled? Coin jewelry might be just the thing for you. 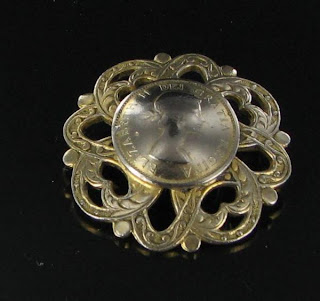 The use of coins to make jewelry goes quite a way back in history. It was very popular between the latter part of the 19th century and WWII to decorate or etch coins with floral motifs or initials. This type of jewelry became known as Sweetheart Jewelry, because sailors and soldiers would often brings these items back to their wives or girlfriends.

Other coins would simply be used as they were and made into earrings, necklaces, bracelets or cuff links. I've even seen some coins which started out whole, but ended up being cut into completely different designs such as animals, ships or the like. In this style, all that is left of the coin might just be a small part of the design.

Coin jewelry can feature coins from any country. Two countries which seems to be featured a great deal are Great Britain and the USA, with many real coins and tons of replica coins finding their way into a fashion statement. Napoleon and Julius Caesar are also often seen as figures portrayed.

Sarah Coventry had several designs of coin jewelry, but many other designers also made this style, including Freirich, Nelly Rosenstein and Ciner.

Here are a few examples. 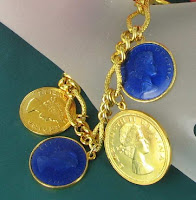 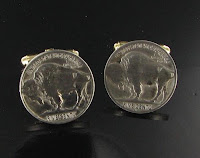 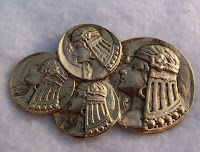