Celluloid is a highly flammable early vintage plastic which contains camphor. One of the main 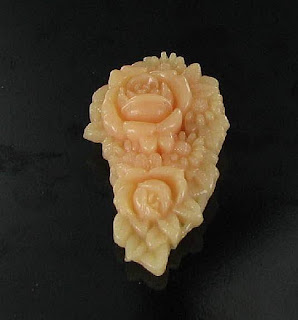 characteristics of celluloid is that it is very lightweight. Celluloid was often used as a design material in the early to middle of the last century, but was later discontinued in favor of heavier more durable forms of plastic.

Celluloid was one of the first plastics to be widely used in making jewelry. The material is derived from a natural plant fiber. The original material was developed in the 1850s in England. Later, John Wesley Hyatt commercialized the use of celluloid. Vintage jewelry using celluloid dates to about 1900.
It was very popular medium during the Art Deco period from 1920-1935. Celluloid was used for a variety of objects, including hair accessories, and pieces were often set with rhinestones or other stones. Highly carved designs were often found on celluloid jewelry pieces, and flowers and leaves were common motifs.
One of the biggest uses of celluloid in vintage jewelry was to make brooches and dress clips, especially during the early 20th century. Celluloid looks similar to some other vintage plastics, but it differs in many ways. It is generally much thinner and lighter than bakelite. It is also much more brittle and can crack when exposed to high heat temperatures - sometimes even being flammable. Even though it can be brittle, it can still be twisted or bent into shape quite easily.
To test a piece of jewelry to see if it is celluloid, hold the item under hot water. it will smell like camphor or vinegar. Never use a hot pin test on celluloid because of the flammability factor.
Here are some photos of early vintage celluloid jewelry pieces: 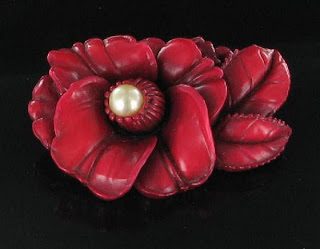 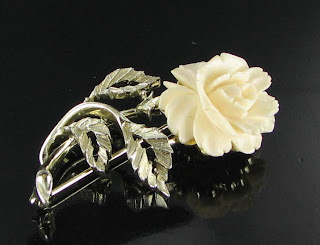 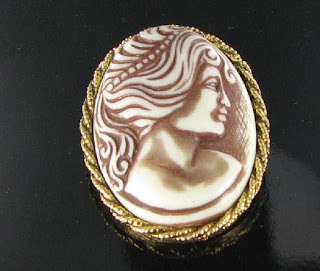