The month is almost over and I still haven't had a 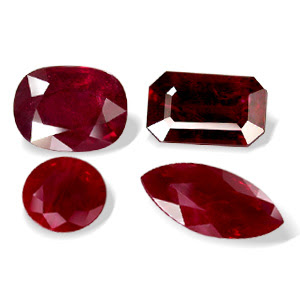 chance to mention the birthstone attributed to July. Rubies are considered the traditional, modern, and mystical birthstone for those born in July. Some charts also show Turquoise or Onyx as the birthstones, but this was only during the 15th to 20th centuries.

Photos of gemstone are courtesy of ebay seller BangkokGemMart
The Ruby is also considered to be the stone of the Zodiac sign of Capricorn, and is often given as a gift for the 40th anniversary.

The history of Ruby mining dates back more than 2,500 years. Rubies are found throughout the world and have been mined in most areas, but Burma is generally considered the area for obtaining the most valuable and highest quality rubies with the deepest red color. The most important deposits are found in Myanmar, which is near Mogok in Burma. Although many rubies are mined, only 1% of them is of gem quality.

As with other gemstones, rubies have metaphysical attributes thought to be connected with them. Two magical elements are associated with red rubies: fire and blood, and they imply warmth and life for mankind. The ruby is also considered by many to be the gemstone which signifies everlasting love. Ancient legends state that one should not make faces at a ruby in a museum since this will make it grow dull. And ancient rulers even thought that a ruby would darken when it sensed danger, only to return to its natural color when the danger had passed.

For healing purposes, rubies are said to be a general health protection and a help for backache and toenail problems.

The color is so rich and regal. What a lovely stone to have attached to your birthday! This lovely Georgian poem aptly describes this birthstone:

The gleaming Ruby should adorn,
All those who in July are born,
For thus they’ll be exempt and free,
From lover’s doubts and anxiety.
Posted by Carol at 8:34 AM