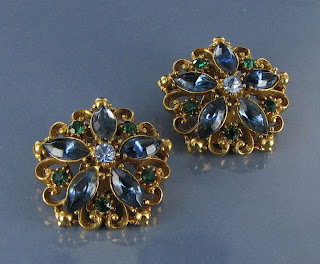 Florenza. The company was started in New York by designer Daniel Kasoff.

This jewelry company has a very interesting start up story. The story is told of how, as a young man, Daniel was in a restaurant in New York and had his coat stolen. Another customer at the restaurant who happened to be dining on the same day was the owner of the Speier Jewelry Company. He came to Daniel's rescue with money to purchase a new coat.

Daniel repaid his debt as soon as he could and was rewarded for his honesty with a position at the Speier jewelry company. He worked there for 10 years and learned the business from the ground up.


Daniel has saved enough in the following years so that by 1948, he was able to open his own business - The Dan Kasoff Company. The company sold his pieces to wholesalers around the world and his jewelry was found in department stores and specialty shops across the USA. The next 8 years proved to be an enormous growing period for his company.


In the 1950s, his son joined him in the business and the company introduced the name Florenza. They chose this name as an honor to Daniel's wife Florence. This is the line that became known for the elaborate old world designs with antiqued goldtone settings which were made to simulate fine antique jewelry.


Design characteristics of Florenza jewelry included antiqued goldtone settings, old world designs, and the creative use of novelty glass stones,. They also had a large line which included the use of genuine shell cameos.

Some of the company's noted customers were Weiss, Kramer, Hattie Carnegie, Coro and Revlon. These customers would bring in the instructions for jewelry and their instructions and ideas found their way into design pictures which then often resulted in the finished product with the well known designer's name. These designs were the property of the customer and carried their name - not the Florenza name.


Only original Kasoff creations carried the name of Florenza. These designs were marketed in many upscale stores as Saks Fifth Avenue, Lord and Taylor and Bloomingdale. The company closed its doors in 1980.


Florenza pieces were marked with the word in script (often on a foil hang tag) or in block, either on a cartouche, or impressed directly into the metal. Here are examples of some of the marks.

The prices of Florenza pieces have been undervalued but are rising on the collectibles market today. Collectors appreciate the varied use of glass stones and cameo collectors prize their pieces which use shell cameos. Since it is still relatively easy to acquire a nice collection at fairly reasonable prices, there is no need to sacrifice quality in your hunt for Florenza jewelry. Look for full sets, shell cameo designs and some of their ornate bracelets.
Posted by Carol at 8:57 AM