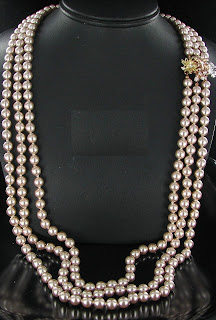 Nolan Miller is a renowned television costumer designer who is best know for his work on the long running 1980s TV series Dynasty. He has collaborated with Aaron Spelling on many television projects.

The creations he designed for Dynasty became so popular that he started his own line of women's apparel called "They Dynasty Collection." This was a haute couture line worn by Joan Collins, Linda Evans and Diahann Carroll.
I'm not sure whether this necklace is part of the Dynasty series, but it certainly deserves to be so. It is just fabulous and I can really imagine Linda Evans wearing it.
The necklace features three exquisite strands of lustrous hand knotted pale pink glass pearls. It has a fabulous flower and rhinestone box clasp which is just stunning in a three metal combination. The strands of the pearls are opera lengths of 34", 36" and 38" and the necklace will slip over the head without undoing the clasp. Remarkable condition - it appears to never have been worn.
This fabulous find of the week is available at my Ruby Lane Finishing Touch Vintage Jewelry shop for only $135. You will feel like an actress on Dynasty wearing it - I promise you!
Posted by Carol at 8:46 AM