Today's vintage jewelry word is tessera. The plural of tessera. (pronounced tess-er-aye) A tessera is an individual tile used in a mosaic, usually in the form of a cube.
Originally, the tiles used were small, naturally colored pebbles, but eventually special tiles were made to use in the making of pictures or designs on mosaics of all types.
In vintage jewelry, this is a word used for small glass tiles which are combined to make intricate designs in Micro Mosaic, Mosaic and Pietra Dura Jewelry, which were very popular with Italian artisans.
Marble or limestone pieces were cut into small cubes that were then arranged into the mosaic design. Much later, the tesserae were made from colored glass. This is the type of tiles that we have come to know and recognize when used in Italian micro mosaic jewelry.
The size of the tiles determines what the mosaic style is called. They range from micro mosaics, where the smallest tesserae were used, through medium sized tiles, which were used in mosaic jewelry, through to Pietra Dura, where the largest tiles were used.
The following are examples of the various styles of mosaic jewelry and shows the differences between the tesserae. You can click on the pictures to get a better idea of the size of the tiles. 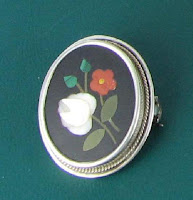 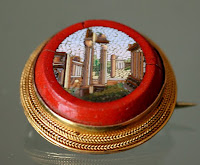 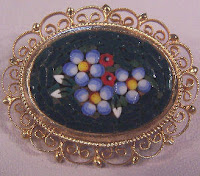 The micro mosaic red photo is courtesy of ebay seller artsmart275
For more words of the week, you can go to our Words of the Week Archives in the resource library on Vintage Jewelry Lane.
Posted by Carol at 8:56 AM