Today's vintage jewelry word is cloisonné. This is a process in which enamel is applied to metal, by first outlining the metal surface with gold or silver wire into a specific design. Then, the space between the wires is filled with enamel and fired to a highly polished, glassy sheen. It is considered a very high grade of enamelling.

Cloisonné comes from the French word which means to be compartmentalized, to be cut off from one another, to feel cut off, or shut out. It is pronounced clwa-zoh-NAY. The Japanese are very fond of cloisonné designs. In Japan the word is called "shippo" which means the seven treasures gold, silver, lazuli, coral, amber and agate, although cloisonné designs do not have all these materials.

Cloisonné is not a word which pertains just to jewelry manufacturing - it is also used in other decorative ways. It thought to have first been used in either ancient Persia or Egypt. Many researchers believe that it was used in Egypt before 1800 BC. The technique was imported to Japan in seventh century.

There is also evidence that the earliest Chinese cloisonné designs were made in the Yuan Dynasty (1271-1368). The best was made during the Xuande period (1426-1456) of the Ming Dynasty. Today, cloisonné designs are considered one of the traditonal arts and crafts in Beijing, China.

The making of cloisonné requires quite an elaborate and complicated process. It involves base-hammering, copper-strip inlay, soldering, enamel-filling, enamel-firing, polishing and gilding. In spite of this lengthy process, most cloisonné designs are moderately priced.

Many cloisonne designs feature flowers and butterflies. If a variety of enamel is used, the piece has a very colorful finish. Here are some examples of vintage cloisonné jewelry pieces. What do you think of the look? 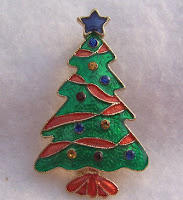 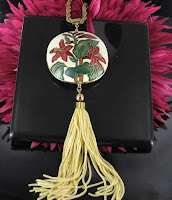 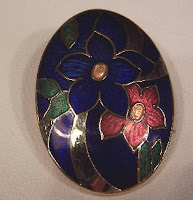 You can click the pictures for more details and prices. They are all for sale in my online shops.
Posted by Carol at 10:23 AM