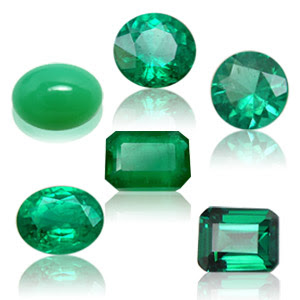 Since the new month is about to start, I will be writing today about the gemstone for May - the emerald.

Photo courtesy of ebay seller BangkokGemMart
Emeralds are mined from what are called "host rocks." They have been mined in many countries around the world, but the most notable mines are those from Columbia. The best locations of Columbian mines are in Muzo, Coscuez and Chivor. Columbian emeralds are especially fine with a very shining emerald green which has very little bluish tint.

As with all gemstones, emeralds have many metaphysical properties associated with them. They are thought to improve intellect and memory and to help with tired eyes and insomnia. Emeralds supposedly give wearers the power to see into the future and are associated with greatness in business. They act as emotional stabilizers and help to release emotional trauma and help to govern perception of other's emotions. And they are thought to be associated with the heart chakra and open the heart up to love, healing and peace.

I just love the color! It feels so tranquil and peaceful to me. This lovely poem aptly describes this birthstone:

Who first beholds the light of day
In spring’s sweet, flower month of May
And wears an Emerald all her life
Shall be a loved and a loving wife.
Posted by Carol at 8:50 AM