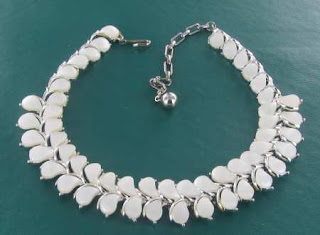 Kramer. This designer is always at the top of the lists of vintage jewelry collectors. Their pieces are well made and truly stand the test of time.
The company was founded in 1943 in New York by Louis Kramer under the name Kramer Jewelry Creations. The continued making jewelry thoughout the peak years of the 1950s and 60s and finally closed their doors in 1979-80.

Louis was joined by his two brothers Morris and Harry as the company grew and their designs became more and more popular, but Louis is credited with the design of the superior Kramer Jewelry.

Kramer made us of unique and rare specialty stones and beads in his designs. They also made a wide range of figural jewelry and whimsical pins, like many other designers of the times. During the 1950s and 60s, Kramer made jewelry for Christian Dior. These designs often had good quality rhinestones with large center focal stones. These Kramer/Dior pieces are very collectible and much sought after.

The 1950s marked the introduction of Kramer's "Golden 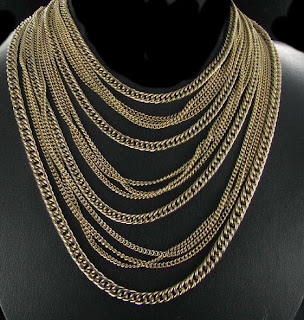 Look." These pieces were simple designs which were made to go with the tailored look of the times. The quality was so good, it was hard to tell them from real gold. Later, during the 1960s, they introduced the "Diamond Look" which was meant to stimulate real diamonds.

The 1960s also saw the introduction of their ear covers. These ear covers had a curved wire which tucked behind the top part of the ear and the earring covered the whole ear and was worn with upset hairdos.

Since the company focused on glamorous jewelry, the natural look in jewelry which was introduced in the 1970s hit Kramer Jewelry hard and it closed its doors in the late 1970s.

Design Marks: Kramer jewelry pieces were made in both marked and unmarked designs. Some were made with only paper hang tags which were often discarded. The following photos show some of their designer marks. (click to enlarge for detail)

amourelle mark photo credit - Annie Popes - Ruby Lane
Higher end Kramer pieces, such as full parures made from the finest rhinestones are the pieces that have risen the most in value. Many top Kramer parures will easily fetch $100-$250 or more today. The designs are top quality and have withstood the passage of time, so the pieces will continue to rise in value.
As always, buy the designs that you personally like and be sure to get pieces in top notch condition. Extras such as original boxes or paper hang tags always add to the value of any Kramer jewelry.

Both jewelry pieces shown are available for sale. The Kramer multi strand chain necklace can be found in my Ruby Lane Shop for $40 and the Kramer white thermoset necklace is found on Vintage Jewelry Lane for $32.99. You can click the pictures for more details.
Posted by Carol at 10:16 AM