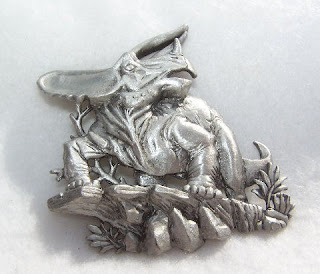 The company was founded in 1935 in Providence, Rhode Island, under the name of Providence Jewelry Company. The owner was Abraham Lisker. Abraham was originally trained as a physician, but gave up this career to begin what would become his life's work. His brother Nathan joined the company in 1937 and the company became known as Lisker & Lisker.
Because of the popularity of some early mother of pearl figurals and ballerina pins, the company decided to focus on making figurals. Their designs are of above average quality and so whimsical and fun to wear.
The second world war interrupted the production of the company when Abraham closed the doors of the company and enlisted in the army for a two year tour of duty. He returned to Providence and renamed the company Jonette Jewelry Company - JJ for short - which was a combination of his father's name John and his mother's name Etta.
J.J. Designs are hallmarked simply with the letters JJ on a rectangular cartouche. I've also seen the letters placed directly into the metal itself as well. Most of the designs all had two things in common - great detail and whimsical designs. This is a photo of the hallmark:

The owner, Abraham, retired in 1972 and his son Gordon took over. In 1986 Lisker trademarked the name "Artifacts" which was an ethnic line with an antique finish, designed to look like historical artifacts. Another line at this time were those with a Southwestern motif such as coyotes, cacti, etc. The company closed in 2006.

Cats and dogs were popular subjects, but the company also did brooches and pins in a wide variety of other animal shapes. They also made a range of very interesting sports jewelry with bar pins and charm dangles featuring the sport.

JJ jewelry has always been widely collected by lovers of thematic motifs. Expect the pieces to raise in value with other collectors now that the company has ceased production.

Here are some photos of a few pieces to give you an idea of the whimsical quality of the JJ designs. All pieces are available in my online stores. Just click the photos for more details. Prices range from $9.99 to $14.99. 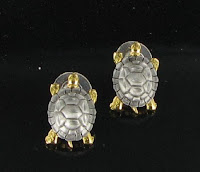 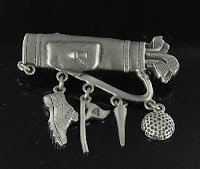 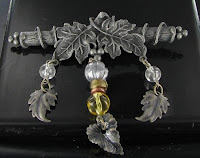 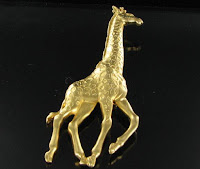 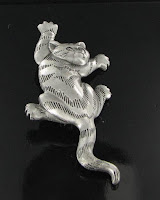 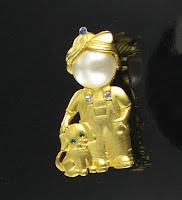